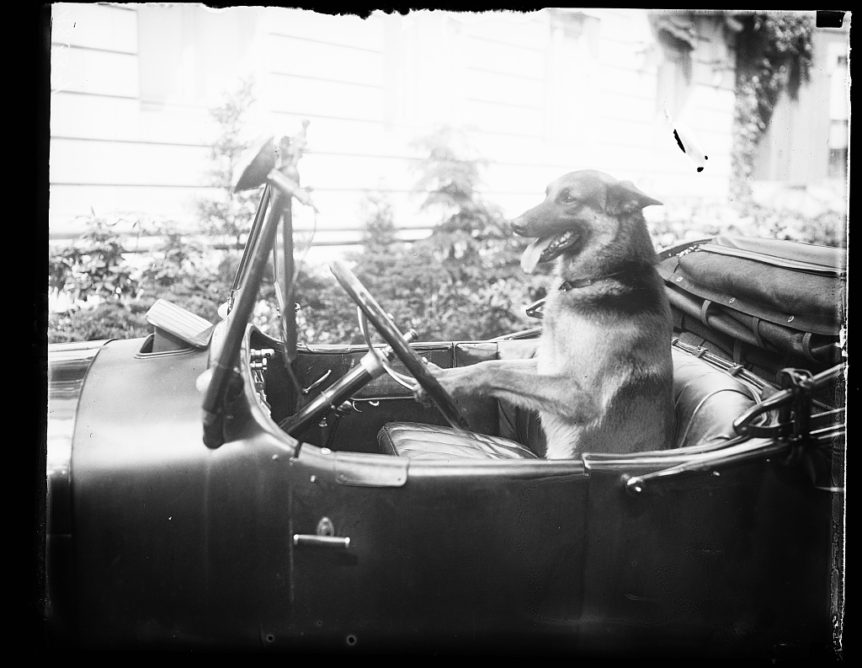 I often wonder what my daughter’s dog would say if it could talk. I don’t consider myself a dog lover per se, but I do like having a big, chunky pooch close-by for the kids to enjoy and to help scare off bad guys as well as the people who sell stuff door to door.

Dogs are cool companions and fun to have as part of the family. Though, you’d have to agree that some people have gone over-the-top pet crazy and lost a bit of their perspective. There are many great dog stories…here is one of my favorites.

A guy named Tim read the following ad in his Sunday newspaper.

More to play along with the amusing gag than anything else, Tim called the phone number listed in the ad. The dog’s owner answered on the second ring. He admitted to being fed-up and was animated when talking about the dog. He claimed to be at the end of his rope with the dog’s constant bragging about the “good old days.”

Tim assumed the guy was a bit off, but was intrigued enough to follow through with seeing the dog. He was certain that the German Shepherd might need a timely rescue from “Captain Lost His Mind.”

Tim drove to the cross-town address and rang the doorbell. Moments later, the owner came outside. He seemed like a normal guy and shook Tim’s hand firmly. He told Tim that the German Shepherd, Ace was around back in the fenced in portion of the yard. Tim asked Ace’s owner, “How do I get him to talk? Is there something specific I need to say to trigger him to speak?”

“Nope!” the man replied, “Just say, hello Ace and he will be off and running his mouth!” Dumbfounded by the continued authenticity of this talking dog charade, Tim turned and went to meet Ace.

Ace was quite a specimen. A prototypical German Shepherd that struck a majestic pose atop a small picnic table in his pen. Tim opened and closed the gate and moved in closer to Ace. As he did so he said, “Hello Ace, you good boy!”

Ace rebounded with, “Who are you calling boy? I am eleven years old now, which makes me seventy-seven in human years soldier! Show me a little respect, would you?”

Tim was stupefied and could barely stand. He was beyond speechless! He steadied himself against the chain-link fence while Ace continued, “By the way, what are you doing here? I am guessing that you are responding to the perpetual classified ad that Einstein runs each week trying to get rid of me.” Ace went on, “I can’t believe it has come to this.”

“You see, I was born at Ft. Bragg in North Carolina and within nine months I was training with Special Forces. Before I was two years old, I was officially a Green Beret.”

“I was part of Desert Storm 1, and 2, after which I was stationed in Afghanistan where I posed as a civilian dog and spied on the Taliban and other insurgents. I participated in more than one-hundred missions.”

“I decided to start a family, so I put in for a less dangerous detail at the United Nation’s International Court of Justice. I got the job and spent two exciting years at The Hague, mingling with kings, presidents and sheiks. I finished up my military career by helping to guard the Tomb of the Unknowns. I cherish my time spent in the Army and there is not a day that goes by when I don’t think about the good old days and my roles helping to protect our country.”

Tim’s skin was goose-pimpled and he could not find any words for Ace. Instead, he made a quick about-face and headed toward the house. Ace’s owner was already headed Tim’s way. Tim spoke first, “You have got to be kidding me, Ace is amazing! I have never seen anything like him.”

“You think so?” Ace’s owner shot back, “That dog is such a big, fat liar; there is no way he did all that stuff!” ” I mean, have you ever heard of a dog pulling an assignment at The Hague?”

It makes me sad when I recognize how many times I can act like Ace’s owner. I can be so focused on some irrelevant detail or on trying to get something perfectly right that I can miss the larger miracle that God is painting for me and those close to me.

I admit that when I am not careful, I can spend too much of my good efforts majoring in minors. That is to say that most things really don’t matter in the divine scheme of things. To varying degrees, we are all much too focused on the outsides; wrestling to acquire some superficial, external artifact that will give us a fleeting sense that we have, in some way, arrived. In a moment, all of that could change for each of us if only we concede that on a more meaningful level, we are already there.

Make your own list. You live in a country of abundance and unparalleled freedoms; you have access to health care and a place to live; a job. You aren’t wondering where your next meal is coming from. You love and are loved. Most of what you worry about all day are the “nice-to’s” not the “have to’s” of living. Sure, life can be difficult at times and there are days on which we can all feel pinned down by the daily pressures of living. Stepping back helps each of us regain much needed perspective.

To almost 98% of all the other humans on planet Earth, each of us is living a life that is much more miraculous than any talking dog.

If they came to our house, these people would ask us:

It is mind boggling how quickly I lose touch with the wealth and abundance all around. Life gets busy and I am still far too tethered to the things of this world. It is hard to break the gravitational pull of material things.

Yep, upon careful reflection and after taking a quick inventory, I must admit that my life is way more miraculous than a talking dog. And so is yours!