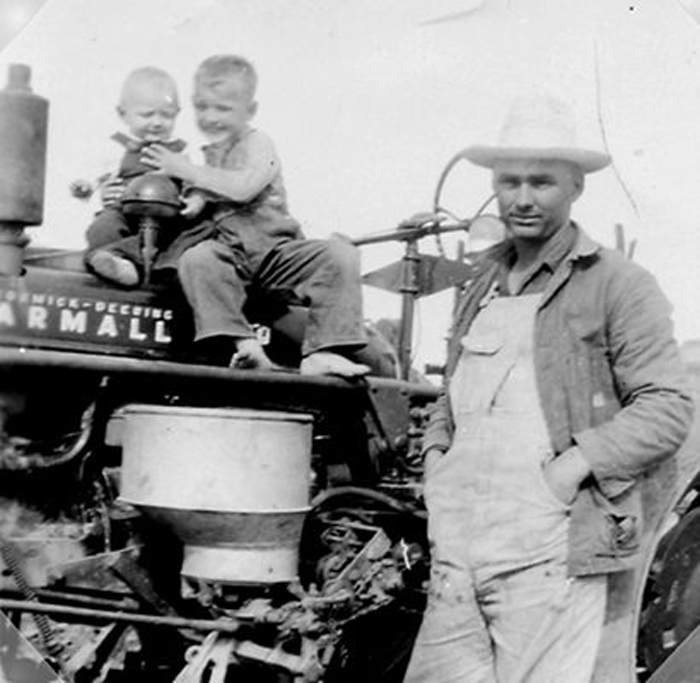 Gifts are poor substitutes for the things that are best expressed by the heart.
–TD Dierker

I am the youngest of the eight children in my family and there is a span of eighteen years between my eldest sibling and me. Both sets of my grandparents married later in life; additionally, my mother and father were the youngest in their families. That said, by the time I came on to the scene, both of my grandfathers had passed. Sadly, I never experienced the joy of being with either of these special and devoted men. As a young boy, I remember being jealous of my older brothers and sisters because they were able to experience the sturdiness and dependability of my grandfathers, particularly my grandpa Dierker. Regardless, I do have strong mental images of these special men due, in part, to decades of listening to my older siblings tell and re-tell stories that they remember from their childhood.

To this day, what stands out as the common denominators from each of my siblings experiences are the quantity and quality of time that they spent with Grandpa. The man had to have been a genius when it came to raising grandchildren.

To my recollection, I have never once heard mention in any of their accounts that he bought anything for them: nor have they shared anything about an expensive trip that they took or some other material extravagance. Amazingly though, I can recite almost word for word their stories of Saturday afternoon trips to the local hardware store during which they raced from tractor to tractor and pretended to be farmers. Or how hand in hand with Grandpa they would meander to the end of his street where there was a small farm. While there they would feed the chickens and casually spend entire mornings doing mostly nothing. Truly special grandparents have been at it long enough to grasp two important beliefs: 1) time is the most precious thing that they have to give and 2) they recognize that things never endure and are poor substitutes for time spent.

My own experiences as a father are reinforcing these beliefs.

A few years ago, my wife and I took our family to Walt Disney World. After requesting the single-day park passes and nearing the end of the transaction, I was certain that the clerk had mistakenly charged me for eight multi-day passes. She seemed surprised that I was surprised by the $1,050 charge for just one day at the theme park. With the benefit of hindsight and if I had been thinking clearly, I probably would have asked her to cancel the charge. After a day of store bought extravagance, what my kids remember the most about our trip was playing in the resort’s 2 swimming pools and the flights to and from Orlando.

At Christmas time I have watched as our younger children spent hours playing with boxes and bubble wrap while the gifts that had served as their payload moments beforehand were already nudged out of mind.

During the summer, we enjoy going to Cincinnati Reds baseball games. Taking four or six members of our family to the ball park is neither simple nor is it inexpensive. Believe it or not, what my children love the most about major league adventures is the $1 bus rides across the river going to and coming from the ball park.

I am grateful that my family has the example that was set by my grandfather and has since been echoed to me by my siblings. My children are the most obvious beneficiaries of his inspiration to forge simple, lasting traditions. Our time spent takes residence in their hearts and while they may forget what we did…they will never forget how our experiences made them feel. I am stupefied when trying to make sense of how humanity has allowed the culture of “acquiring more stuff” hijack the indelible aspects of being parents or grandparents.

When it comes to making memories if more, better, bigger, faster, more expensive or more complex is the answer, then it is likely that I am asking the wrong question.

More stuff is not the answer; things don’t deliver happiness. To the contrary things break, rot, lose value, need insurance, require technical support and service, demand upgrades and lead to the need for newer models. In my past, acquiring things has bred competition, disappointment and often leads to resentment. I have found that in most instances, the bigger ticket items like cars, motorcycles, and boats require such vigilance and policing that they can become major “fun-extinguishers” and unwittingly rob us of our joy.

Establishing and maintaining better balance and focus leads me to possess more of me, so that I can freely give to my loved ones what they want more than anything else…easy-going and carefree time spent with me and with one another.