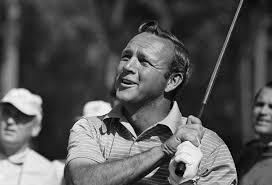 One afternoon in heaven, Jesus and Moses were playing a round of golf. On a particularly long par 3, Moses hit his fairway wood from the tee and his ball came to rest on the green about twenty steps from the pin. Jesus then asked Moses what club he thought that Arnold Palmer would use to make the green. Moses responded, “I bet that he would hit a five iron.” Jesus proceeded to swing his five iron and it was his best ever five iron shot.

Regrettably, Jesus’ ball came up twenty yards short of his target and splashed into the water surrounding the front of the green. Undeterred, Jesus summoned Moses to part the water so that he could retrieve his ball. Teeing his ball for the second time, Jesus was determined to swing the same club that he believed Arnie would use in this situation. Jesus’ second attempt had nearly the identical result as his first. Impatient to attempt his putt, Moses refused to part the water a second time and so Jesus walked out on the water to retrieve his ball.

At that very moment, a foursome came up to them on the tee. When they saw Jesus walking on the water, one of the golfers asked Moses, “Who does that guy think that he is…Jesus Christ?” Moses sighed and responded, “No, he thinks that he is Arnold Palmer.”

This past weekend, I golfed with two of my sons in our family’s 27th annual memorial golf tournament. It had been almost one year since I last played golf and it showed. Following the painfully mediocre round of golf, I was asking myself why I play golf in the first place. I readily admit that it is a great game and I really do wish that I could play more competitively. The reality is that my lifestyle does not lend itself to having the time to hone my golf game into something more respectable.

I cannot name another sporting event in which I participate on the same occasional basis that frustrates me more than golf frustrates me. I’m not sure why I have such great expectations for my performance…I rarely play. By comparison, I probably have the same odds of securing a positive result from my efforts in the 120-meter ski jump, Formula One racing or cliff diving in Acapulco. There is no way around it, to be good at anything requires a whole lot of time and practice and even though golf is made to look easy on TV, it is not an easy game to play well.

Beyond the game of golf, it remains challenging for me to recognize when I am about to whiff in my life and miss important targets altogether. I must hone my ability to say “no” to great activities that are outside of my sweet-spot and peripheral to my core purpose. These days, I am far better off steering clear of hobbies that require a lot of time just to play at a level at which I don’t embarrass or hurt myself.

I read a story this morning about a man who spent most of his high school years focused on becoming his school’s tennis champion. Having succeeded, he felt proud to see his trophy displayed in the school’s trophy case. Many years later, someone found his trophy in a dumpster. It turned out that the school was being remodeled and there was no plan to put the hard-earned trophy back on display. This forced the man to realize that given the passage of enough time, all accomplishments and the trophies that are awarded in testament will likely be forgotten by others. We would do well to keep this realization in mind ourselves.

All of this reflection is a powerful reminder for me to more effectively concentrate my energy. I will be better equipped to prune those activities that are not essential to achieving my eternal purpose.

I require and value more downtime than participation in activities such as golf provides to me. I need more meaningful time with my family and those closest to me. I want to direct my life’s energy in ways that are substantial and long lasting. In other words, on a go forward basis I won’t be dedicating any afternoons to golfing, during which time I risk deluding myself into thinking that I can play like Arnold Palmer.